A Winning Start to the Season

Posted on April 9, 2013 by simplystretch 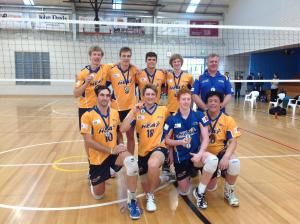 YEP that’s right a winning start! Over the past weekend we made our way to Orange, a medium sized town around 3 hours west of Canberra  After aiming for a 5.30 departure time and ending up leaving at half 6 it was not the ideal start to a tournament which we won last year and were looking to defend. Well we got on our way, but as things were working out that morning our coach had us driving to Sydney, I quickly pointed this out and an abrupt U-ee saw us heading in the right direction!

We made it with plenty of time for a decent warm up before our first game again University of New south Wales. We won in 3 comfortable sets and were looking good. Having played minimal games with each other it was good to see a connection was already taking place on court. After a quick turn around we played Newcastle, A group of older, wily gents. We lost 1 set but came out strong in the third to win it comfortably and progress into the finals topping our pool. We had a delicious meal at Hogs Breath and then had to travel 45 minutes to Bathurst for accommodation, either coaches idea of a funny joke or just to save money it was a great feeling to get there. A short team meeting ensued and it was lights out.

Sunday brought an early start of bacon and egg rolls from the local bakery and some chocolate milk- Breakfast of Champions! We made our way to the stadium knowing we had put ourselves in an excellent position to win the tournament. In the semi we came up agaisnt another canberra team-dragons. This contained the mgihty Chris Todd! ha. Knowing Chris’ ability to win an entire match by himself our tactics weere to not give him the ball at all. we executed these eprfectly and won in 2 comfortable sets.

We then had the final agaisnt UTS. What is turning into quite a rivalry over the last few years saw a tight first set until we pushed away ending up winnig 25-18 in the first. The second was a similar story but some good, precise serving and excellent apssing saw us take an easry 6 point lead (11-5). From here we weere uncatchable, althoghu at stages lost several points in a row we were alwyas able to bounce back and came up with the win in 2 sets 25-18, 25-17.

We got our shiny gold medals ooooo which amde the long travel home a little bit better.

A great win for the team and looking forward to building up for manly in 2 weeks time!

This is our highlights video!